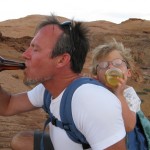 As part of a large, multi-disciplinary study (Coastal Ecosystem Services amongst Trophic Cascades) to investigate the changing ecosystem on the west coast of Vancouver Island  (WCVI) in British Columbia, Canada, my work focuses on the development of spatially explicit models of representative ecosystem services, and how they are influenced by various management scenarios.

The recovery and continued expansion of sea otters (Enhydra lutris) on the WCVI is increasingly impacting numerous commercial species (e.g., shellfish, sea urchins, Dungeness crab), and potentially inhibiting the recovery of the critically endangered northern abalone (Haliotis kamtschatkana). The sea otter expansion represents a unique natural experiment, with the opportunity to collect life history and distributional data of key species, in different ecosystem states. Such data are critical to overcoming some of the technical barriers to the development of useful models of the ecosystem.

I will support ecosystem-based decision making in this context by formulating the management challenges in a decision analytic context, considering the risks associated with various scenarios, and using ecosystem services to fully describe the values emerging from various management scenarios.